In Songs of Tarros: Heartsong, the beidrekka is a lethally venomous lizard in the world of Thelios and the moniker adopted by a notorious hacker. When coming up the idea of this futuristic terror (the lizard – not the hacker), I looked to the past and the tales of basilisks.

Basilisks have been part of our legends since ancient Rome when Pliny the Elder wrote about them in Natural History in 79 CE. According to Pliny, basilisks were small but deadly. He described the “king of serpents” as having a crown-like crest on its head and holding itself aloft as it moved. They were believed to be so venomous that just their breath could wither plants and split rocks. Ancient Romans believed the Sahara had once been a rich, fertile land that had been blighted by a basilisk infestation.

The legends continue through medieval times, when contemporary accounts tell of basilisks being the reason for illness and unexplained deaths. Basilisks are described as cruel and malicious, with their evil nature corrupting the air around them.

This seemed a good fit for my beidrekka – not very big, but aggressive and deadly. But what about appearance? 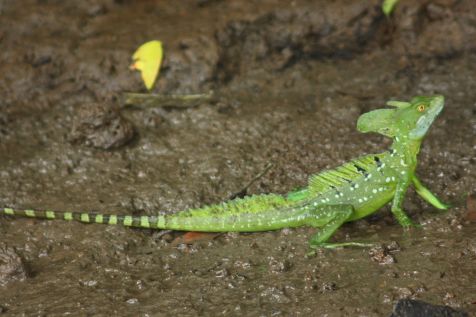 A member of the iguana family in Central America, the green basilisk in an omnivore that grows to about two feet long, and the males have high crests on their heads and backs to impress the females. Like most lizards, pregnant females practice fire-and-forget parenting: they can lay up to twenty eggs at a time, and then leave the eggs and subsequent babies to fend for themselves. Babies hatch with the ability to run, climb, and swim.

Due to abundant predators, basilisks spend most of their time in trees near bodies of water. When threatened they can drop into the water to run across its surface for fifteen feet or more at a rate of 3.4 miles per hour. They are excellent swimmers, and can stay under water for up to half an hour.

So there we have a beidrekka: a physical appearance and abilities much like the green basilisk lizard, but far more predatory, dangerous, and downright mean like the monster of legend.