In the Earth year 2138, astronomers discovered asteroid 873592 — named Ragnarok — was on a collision course with the moon. Teams of scientists set to work trying to avoid calamity. Some sought ways to divert the asteroid’s course, while others designed huge underground bunkers designed to protect people from the catastrophic effects such an impact would have on Earth’s climate. As attempts to change the asteroid’s course failed, a third plan grew in popularity and funding.

Governments around the world worked together to build huge space ships capable of supporting large numbers of people for an indefinite amount of time. The completion of these generational arks signaled the beginning of the largest migration in human history. The arks were loaded with seed banks and DNA samples of all known life on Earth. Archives of all types were loaded onto computer servers at the heart of each ship.

On April 25, 2173 the majority of Earth’s population boarded the arks and set out to the stars in search of new planets to call home. The arks did not stay together, but rather set out in all directions to increase the chances of at least one ship finding a habitable planet. Initially, the ships remained in contact with one another, but contact dwindled over the course of an Earth year. All contact between ships ceased within two Earth years.

There was nothing unusual about the Thelian Dawn. Like the other arks, it was designed to support its population (human, animal, and vegetation) indefinitely as it traveled through space. Eight generations lived and died on the Thelian Dawn. One hundred years after the death of the last person aboard to have walked on the Earth, long-range sensors detected a potentially habitable planet. The ship diverted course to orbit this new planet and determine if it would indeed make a viable home for the Thelian citizens.

They proceeded with caution — running initial tests and observations from the Thelian Dawn itself before moving on to unmanned drones and eventually scouting parties. The atmosphere of this new planet was similar enough to Earth to support the life aboard the colony ship. Scouting missions discovered life forms both benign and aggressive, though the aggressive species were deemed to not pose a significant risk to the settlers. Meetings and forums were held to discuss options and make decisions. Eventually the citizens of the Thelian Dawn voted to stay, naming the planet Thelios. 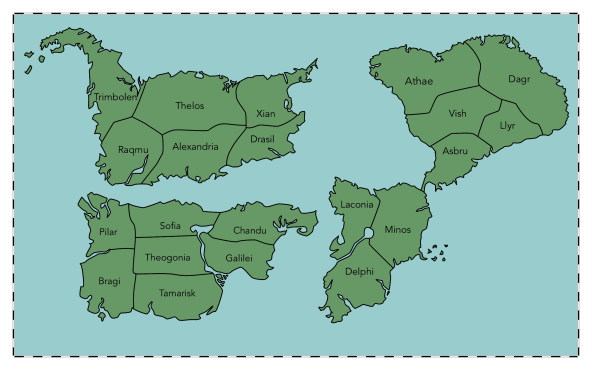 The four continents of Thelios –- creatively named Alpha, Beta, Gamma, and Delta based upon order of settlement –- are divided into 21 regions. A global government sets the core laws and maintains infrastructure, education and security on a global level. The 20 settled regions are otherwise autonomous. The 21st region, Trimbolen, has remained unsettled but for a research center, and falls under the direct control of the global government.

All Thelian citizens pay a flat tax of 20% to the regional government, which then sends a portion of those taxes on to the global government. Unemployment is all but unheard of on Thelios. Those without jobs are given temporary work for the government until they can find work in the private sector.

Regional governments ensure all citizens have food, shelter, and medical care. These provisions are not lavish and come with caveats: food meets all nutritional needs but tends to be bland; housing is clean and sturdy, but those who live in government-provided houses are subject to regular inspections. Myriad sensors monitor the occupants, and those found to be breaking the law or leeching benefits are subject to review and may lose housing privileges.

Many Thelian citizens rely upon public transportation to move about their daily lives. Even the smallest villages have municipal shuttle services and are connected to larger cities via rail lines. High-speed trains connect major cities. Large hoverferries are the common form of transportation to and from islands and between continents. Air travel is reliable and inexpensive, but is rarely used except for travel between continents.

Slightly fewer than half of the citizens own cars, and many who do own cars do not know how to drive – relying instead on driverless technology built into the cars. Authority override included in vehicle programming enables medical personnel and guardian forces to assume control of a car at any time.

Education has always been one of the highest priorities of the Thelian people. School attendance is not mandatory regardless of age, but Thelian society is such that it is unfathomable to think a child may not wish to learn. Educational programs are structured so that the families choose the school they feel best teaches their children based upon learning styles. All schools teach the same materials but in different ways.

Higher education on Thelios is through the Academy which is run by the global government. Each region has one Academy and each of the Academies offer the same studies. Few students are formally accepted into the Academy but the classes are opened to all regardless of Academy registration, though enrolled students are given preference in popular classes. Graduating from the Academy is akin to completing a doctoral program – the graduate has not only absorbed information but has in turn proven a mastery of their subject. The Academy is always located in the principal (capital) city of the region – thus making the principal city not only the seat of power but the academic and cultural center of the region as well.

Though the Thelians value knowledge to the extent that they make it open to all, there are also deep spiritual leanings in society. A few of these faiths formed while on the Thelian Dawn, but more formed once the citizens were settled on the planet. Many faiths – both older and newer – borrow from the beliefs and mythologies of Earth. Thelian law allows for citizens to practice their faith as they see fit provided such practice does not break any laws. Few belief systems extend farther than a single region. The spiritual tendencies of the people have been strengthened by the occurrence of incidents that many deem miracles – incidents that the even the top scientists were unable to explain.

The truth of these miracles is that magic exists. Few people – all within the global government – know this truth. Even fewer are able to perform magic. The first known magic users were aboard the Thelian Dawn – indicating that the ability was either passed along genetically from Earthling ancestors or developed though mutation while traveling through space. Myriad tests were performed on those who demonstrated magical abilities but the tests were unable to point to anything that would indicate why one person would have such powers while another would not.